According to Statistics Estonia, in 2019, life expectancy at birth was 74.4 years for males and 82.8 years for females. Life expectancy has increased for both sexes, slightly more for males. Men are expected to live disability-free for 54.1 and women for 57.6 years.

In 2019, 488 children were born through in vitro fertilization.

Data on artificial insemination are available in the Health Statistics and Health Research Database (tables KV10–KV14).

In 2019, a quarter (23%) of the nearly 13,700 infants up to the age of one year monitored by the family doctor or family nurse, were exclusively breastfed at six months of age.

The indicators of infants at six and twelve months of age who were exclusively or partially breastfed was 72 and 33 percent of infants up to the age of one year respectively (see figure). The both indicators have increased by 10 and 14 percentage points over the last five years. 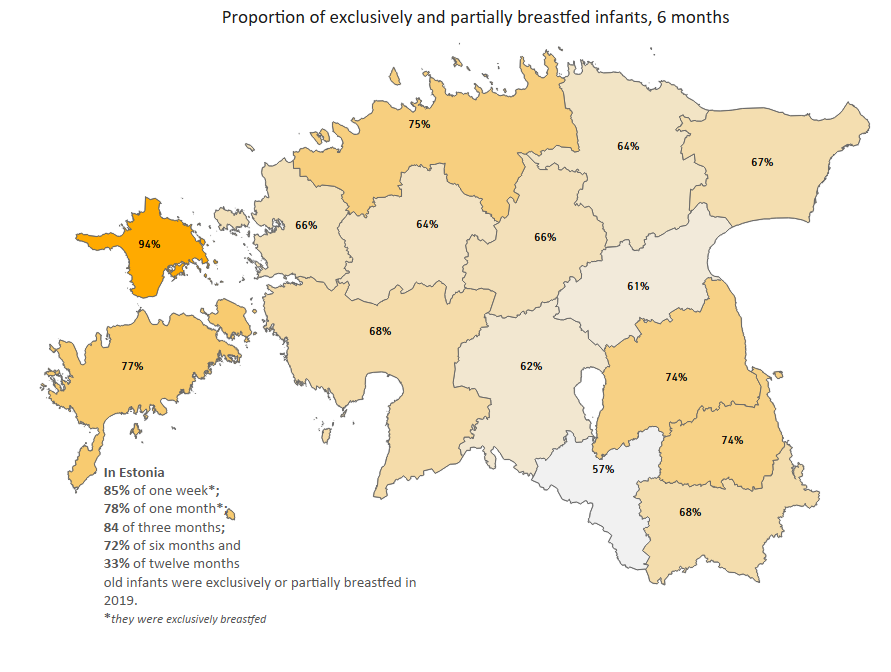 (by clicking in the figure, you see the interactive graph)

In the first five months of 2020, a total of 47 cases of tuberculosis (TB) have been registered in Estonia, of which 40 are new TB cases, according to the data of the Estonian Tuberculosis Register.

As of today, preliminary registration data of tuberculosis cases by county and month are available in the Health Statistics and Health Research Database. The data will be updated every month.