Statistics of medicines and pharmacies 2019

The number of blood donors decreased, but blood donations were at the same level

In 2019, a total of 30,533 people donated blood in Estonia, which is almost 800 or 2.5% less than in the previous year. At the same time, the number of blood donations remained at the same level, according to statistics published today by the National Institute for Health Development (NIHD).

The number of blood donors decreased for the sixth year in a row, but in the last two years the decrease has been smaller compared to the previous average decrease of 4% in 2014–2017.

A total of 53,445 blood donations was given last year (53,873 in 2018), so one donor donated blood 1.8 times a year on average (the one blood unit is 450 ml). This indicator has slightly increased compared to the previous years, when it was 1.6–1.7, i.e. frequent donors are actively involved in blood donation. 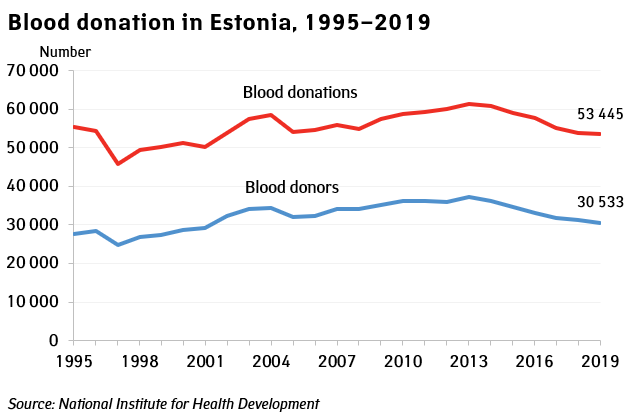 National Institute for Health Development has published health insurance statistics 2019 collected and managed by the Estonian Health Insurance Fund. Statistics show that the proportion of men covered by health insurance has increased significantly, which also increases the overall number of health insured persons.

The data on Estonian health insurance are published in the Health Statistics and Health Research Database in two ways:

Traffic accidents, drownings, fires and fatalities due to fires 2019

The 2019 Estonian Road Administration's traffic accidents statistics by municipalities is added to database. The Rescue Board data on deaths due fires and drownings by counties and causes of building fires by municipalities are also available. The total number of accidents in 2019 has decreased compared to 2018.

The data can be viewed here.

Health promoting kindergartens, schools and workplaces network statistics for 2019 is published in database.